Skip to content
UAE, June 4, 2014 – H.E. Humaid Mohammed Al Qatami, Minister of Education, affirmed the ministry’s continuing role in the development of the local educational system, abiding by the request of H.H. Sheikh Khalifa bin Zayed Al Nahyan, President of the UAE and Ruler of Abu Dhabi, and H.H. Sheikh Mohammed bin Rashid Al Maktoum, UAE Vice President, Prime Minister and Ruler of Dubai, and the Supreme Council Members and rulers of the Emirates.
The statement of support was part of H.E. Al Qatami’s speech delivered during a ceremony honoring the winners of the Emirates Award for Educational Excellence 2014, which was organized by the Ministry of Education (MoE), sponsored by DU Telcom and evaluated by Dubai Quality Group. During his speech, he also announced the new categories with a special program aimed at spreading the culture of quality and excellence among students. The program is also meant to motivate them to always aim for the top by giving their best in every endeavor. 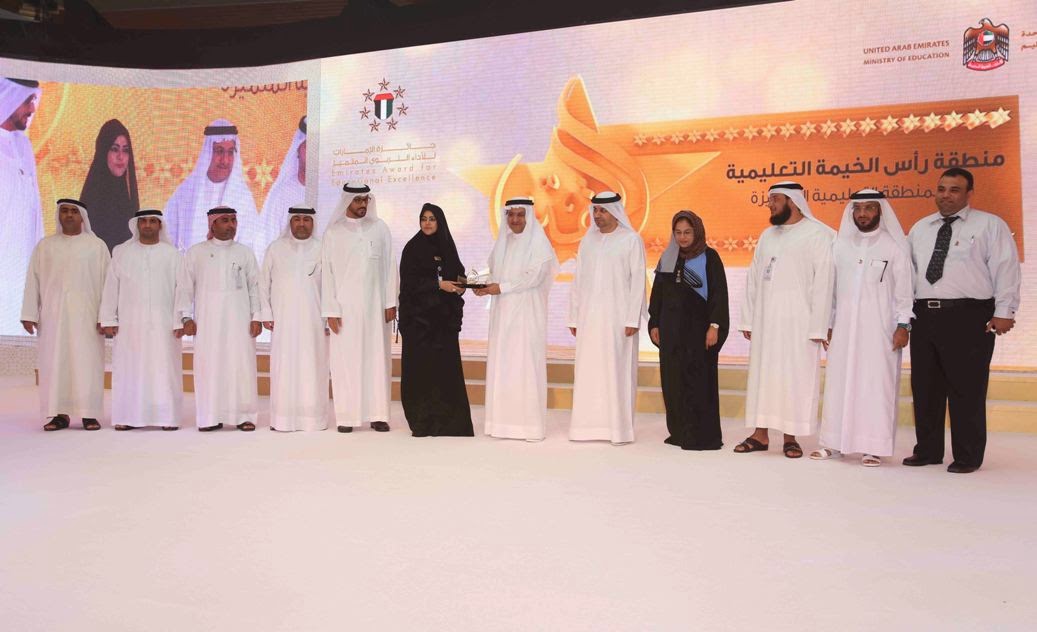 H.E. Al Qatami said: “The initiative made by the Ministry of Education in its pursuit of development is a direct result of collective teamwork, creative thinking, and consistent efforts, while the achievements given by the Ministry to provide the best possible education and a good school role model is the direct result of the dedication and team spirit, bringing together those responsible for the planning, implementation, monitoring and evaluation. This gave the Ministry of Education the upper hand and a leading position. It won various awards and recognitions such as best government service via smartphones; the ‘Abnaee’ application; classification of center traders as a five-star service; the ‘Mohammed bin Rashid for Excellence in Government Performance’ awarded to team Mohammed bin Rashid for smart learning; and the ‘Prime Minister  Award’ given to Khawla Al Hosni. In addition, we also received the international prize of high-level strategic planning, and international award in networking social. All these recognitions showed the importance of sustaining our efforts towards our aim to become the most advanced and developed organization, with our ultimate goal of achieving global competitiveness.”
“We still have a lot of work to do as we remain steadfast in our progress and continuously form strategic partnerships with national institutions such as DU Telecom and Dubai Quality Group. We extend our gratitude and appreciation to both organizations for supporting the Emirates Award for Educational Excellence. We congratulate all winners. Today, we celebrate the efforts of our employees across levels that have worked hard and performed well, which made them deserving to win the Emirates Award for Educational Excellence,” he added.
H.E. Marwan Al Sawaleh, MoE Undersecretary and Chairman of the Supreme Committee for the award, said: “The number of contenders now doubled compared to the previous edition. This reflects our employees’ passion for excellence and commitment to deliver better education. In addition, we are eager to consistently improve the quality of our performance. The award was launched to promote the principles of excellence and the culture of quality and competitiveness within the ministry and its affiliates.”
He thanked DU for its full support that directly contributed to the attainment of the award’s objectives. He recognized everyone’s efforts, teamwork and cooperative spirit as well. He also expressed his appreciation to the administrations of the educational zones.
Speaking on the occasion, Fahad Al Hassawi, Chief Commercial Officer, DU, said: “We are proud to collaborate with the Ministry of Education for the second Emirates Award for Educational Excellence. We congratulate the winners from the educational institutions, faculties, and administrative personnel who contributed and still contributing to the strengthening of the UAE educational system.”
Al Hassawi added: “Our partnership with the Ministry of Education is part of our social responsibility to educate the young people as our future leaders and achieve sustainable development. We are one with the objectives of the award in its efforts to promote quality and high standards in various fields of the learning process. A strong educational system leads to the creation of a generation of skilled graduates, who will eventually become leaders in the various institutions of society.”
For their part, the honorees expressed their appreciation to the ministry. They also commended the MoE for its development initiatives which focus on strengthening the performance and skills of its human resources, encouraging teamwork and promoting a healthy work environment.